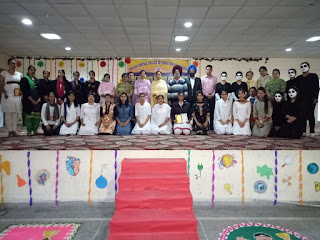 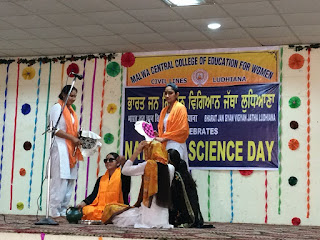 Science Department of Malwa Central College of Education for Women in association with Bharat Jan Gyan Vigyan Jatha celebrated National Science Day on 07-03-2018. The theme of the programme was ‘Darwin’s contribution to Society’. The programme started with shabad recital and lightening of lamp. Dr. Naginder Kaur, Principal of the college presided over the function and formally welcomed the chief guests and other dignitaries. Mrs. Balwinder Kaur, District Science Supervisor was the chief guest and Mrs. Prabhjot Kaur, councilor, Municipal Corporation, Ludhiana was Guest of Honour.

A declamation contest on the same theme was held, in which six students participated.  Shri Ranjit Singh President of Bharat Jan Gyan Vigyan Jatha apprised the students about the life and work of the first Indian Nobel Lauriat C.V. Raman. Shri M.S. Bhatia, Organizing Secretary of Bharat Jan Gyan Vigyan Jatha appraised the audience about the contribution of Darwin in explaining the origin of man and role of evolution. Mrs. Kusum Lata, National Awardee and Principal of Govt. High School, Sarabha Nagar spoke about the life of Charles Darwin and how the present theories have provided evidence for the Theory of Evolution given by Darwin. To sensitize the audience about the wastage of natural resources and their conservation, a power point presentation on ‘Save Planet’ was given by Harpreet Kaur and Sheenam. Mrs. Balwinder Kaur shared her views on the importance of science in daily life and the importance of inculcating the scientific attitude among students. A skit was also presented by science students to showcase the nuisance of superstition and making the audience aware about value of science in day to day life. Science contribution in man’s life was showcased beautifully by students through a Mime. Dr. Mandeep Kaur presented formal vote of thanks.
Results of Declamation Contest: