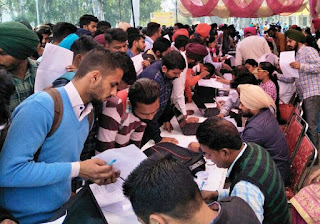 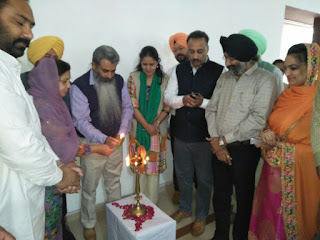 MLAs FROM LUDHIANA WEST AND LUDHIANA EAST INAUGURATE THE FAIR

LUDHIANA, March 1 (Amandeep Singh): A Mega job fair held under Ghar Ghar Rozgar scheme of Punjab Government, at ITI campus on Thursday, got an overwhelming response from youths and companies.

Around 1912 youths from Ludhiana, Sangrur, Moga, Patiala, Khanna and other areas got registered themselves in the job fair in which more than 20 renowned companies including Larsen & Toubro, Hero Cycles, Vardhman, Kumar Exports and others participated for the recruitment. A total of 1677 vacancies of various trades including Fitter, Painter, Electrician, Supervisors, Marketing, Welder, Machine Operator, Account, and others were demanded by the companies.

MLA Mr. Bharat Bhushan Ashu claimed that the holding of job fairs would prove to be a milestone in fulfilling the promise of Punjab Government for giving a job to each household in the state.

He said that these job fairs would not only weed out the unemployment from the state but these also offer a golden opportunity to the youths to work in the renowned companies.

Additional Director Technical Education and Industrial Training, Mrs. Daljit Kaur Sidhu disclosed that on March 5, Punjab government is organizing state level job fair in Patti town, the first time in a border town of state for ITI pass outs and appealed the youths to register themselves so that they can be provided the jobs as per their professional and academic qualifications.

ITI Ludhiana Principal Mr. Jaswant Singh Bhattal informed that out of 1912 youths who appeared in the job fair, 539 have been selected by the companies. He said that appointment letters would be issued to them by Punjab CM Capt Amarinder Singh soon.