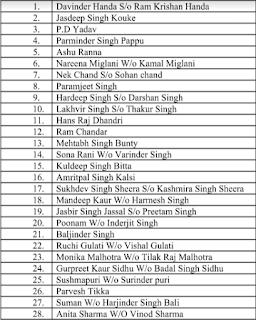 Ludhiana/, Amandeep Singh February 21: The Punjab Congress has expelled 28 party workers in Ludhiana from the primary membership of the party.
An order signed by Punjab Pradesh Congress Committee (PPCC) president Sunil Jakhar said these members had been expelled for anti-party activities.
The decision to expel them was taken as these members had chosen to contest the Ludhiana Municipal Corporation elections as independent candidates against the party’s official candidates, according to a party spokesperson.
Those expelled are: