Yuvraj Sidhu gets thumping response during door to door campaign 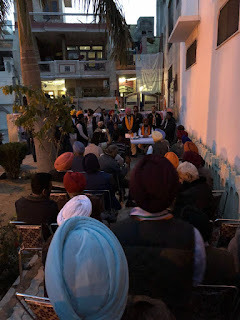 During a series of door to door campaigns in his ward number 46, Congress candidate Yuvraj Singh Sidhu has got thumping response from the people of his area. He visited Model Town area, Trikona Park, central park among other areas.

Yuvraj who is son of senior Congress leader Kulwant Singh Sidhu started his campaign soon after his ticket was announced four days ago. Since that day, Sidhu has been visiting each and every home and trying to meet everyone in his ward.

People responded to the campaign of Sidhu and also claimed that no or little develoomental works were done during the past several years in the ward. They stated that the SAD councilir failed to work for the people of the ward and they hope for a better future under a Congress councilor.

Meanwhile Kulwant Sidhu is also accompanying his son Yuvraj in door to door campaign in the ward and stated that he has pinned hopes in his son. Sidhu said that he would ensure that all developmental works that were not being completed for past long time are done within a stipulated time frame.

Yuvraj Sidhu said that after winning the polls he will ask the civic body officials to provide all basic amenities to the residents of the ward.